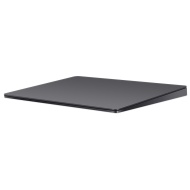 alaTest has collected and analyzed 22 user reviews of Apple Magic Trackpad 2 / MJ2R2 from Amazon.co.uk. The average user rating for this product is 4.8/5, compared to an average user rating of 4.2/5 for other products in the same category on Amazon.co.uk. Reviewers really like the durability and reliability. The design and usability also get good feedback. Many are critical about the size and price.

100% of the reviews on Amazon.co.uk give this product a positive rating.

The Magic Trackpad 2 is larger than its predecessor, and adds a rechargeable internal battery and Force Click, but it's nearly twice the price.

Conclusion On basis of merit alone, the Apple Magic Trackpad 2 is a worthy successor to the first iteration. Force Click may get the headlines and certainly requires some explaining for those who haven't used it before, but the real upgrade here is the...

Force Touch is the new pressure-sensitive tech from Apple that promises to change the way we interact with our Macs by offering shallow and deep "layers" of interaction on the trackpad. A separate trackpad won't suit all users, but if it's how you like...

A separate trackpad won't suit all users, but if it's how you like to work then the Magic Trackpad 2 adds plenty of new features above and beyond the original model.

The Magic Trackpad 2 is shockingly large and blindingly white. It looks kind of a like a futuristic thing you'd find in a high-tech kitchen, like a smart scale or a wireless charging station or a heating pad that keeps your coffee at the perfect...

If you’re buying a new iMac, I would definitely choose the Magic Trackpad 2 over the Magic Mouse 2. But if you’ve got a Mac without a Force Touch trackpad, you might consider waiting until Force Touch becomes more ubiquitous and essential than it is...

Apple's updated Magic Trackpad, released alongside the new generation of iMacs, is bigger, whiter and equipped with Force Touch pressure-sensitive technology. Here's our hands-on review of the Magic Trackpad 2

Brings Force Touch to older Macs ; Some Force Touch features are convenient and applications will add features in future

Expensive ; Force Touch not yet ubiquitous enough to be genuinely useful

To dredge up a review cliche, Force Touch is a nice-to-have rather than a must-have at this point - as more and more applications add Force Touch features, it's likely to become ubiquitous, and genuinely useful, but at the moment it's just a pleasant...

I got this about a week ago. The packageing was great, very well protected and very smart packageing. As I am a VA (virtual assistant) I use this all day every day and its so much better than any other keyboard I have ever used.

Being a new user to Apple products and not liking a trackpad on a laptop I was vary about buying this. Yes it is expensive but you get what you pay for. This has got to be one of my best buys and I love it. Very easy to use and, in my opinion, a lot...

I love this product. Thank you for the excellent item and excellent service.